(Note: this is not an OAA-sponsored event)

It’s that time of year once again — the Los Angeles Asian Pacific Film Festival (LAAPFF) is right around the corner (April 27th through May 11th) with tons of new films and videos produced by and for the Asian and Pacific Islander communities.

As an aspiring filmmaker myself, I believe that representation in the media is important. We need to see more Asians and Pacific Islanders on screen and behind the scenes, which is why we need organizations like Visual Communications (VC) and events like the LAAPFF.

As a fourth generation Uchinaanchu (Okinawan), I always keep an eye out for any and all things Okinawan. That being said, I’d like to spotlight a few films from this year’s festival that were directed by, starring, or curated by Okinawans and Okinawan Nikkei.

(Please note that this not, by any means, an “official” or “comprehensive” list. These are merely recommendations based on my opinions and research.) 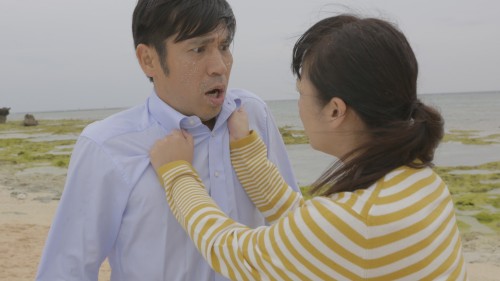 Hitoshi has returned to his hometown of Agunishima, Okinawa to introduce his wife, Yuko, to the family. But Yuko is furious when she’s told the reason for the trip home. The true purpose was for the “senkotsu” ceremony—Agunishima’s continuing custom of cleansing the bones of the dead. This is a heartwarming comedy of a disconnected family discovering their true selves through the ceremony of cleansing bones.

AUTHOR’S COMMENT: This project was filmed in Okinawa and directed by Okinawan filmmaker and comedian Toshiyuki Teruya. Also known as “Gori,” he is a member of the popular comedy duo Garage Sale and has appeared in a number of Japanese movies and dramas.

After a brief hiatus, the “Itsy Bitsy Shorts” program is back! This morning program will showcase films for the littlest film lovers. Kids will also explore movie magic through interactive activities, including an appearance by the Echo Park Film Center’s Filmmobile, a school bus transformed into a mobile media classroom.

AUTHOR’S COMMENT: This program was curated by Okinawan American filmmaker and educator, Gena Hamamoto. Ms. Hamamoto has worked with the OAA in the past, screening her short documentary “Typhoon of Steel” at one of our Battle of Okinawa memorial events as well as being a guest speaker at the 2013 Worldwide Youth Uchinaanchu Festival. 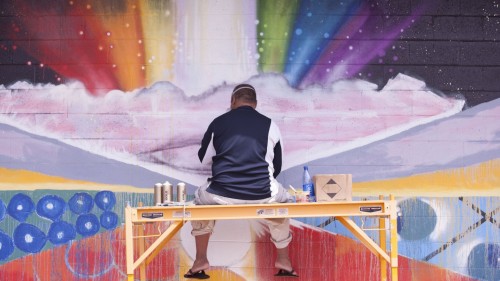 MELE MURALS is a documentary on the transformative power of modern graffiti art and ancient Hawaiian culture for a new generation of Native Hawaiians. At the center of the story are two renowned street artists – Estria Miyashiro (aka Estria) and John Hina (aka Prime) – a group of Native Hawaiian youth, and the rural community of Waimea.

AUTHOR’S COMMENT: One of the stars of this documentary, Estria Miyashiro, is of Okinawan, Japanese, and Hawaiian descent. His artwork and beliefs are based on the fundamentals of Hawaiian (and Okinawan) spirituality (e.g., reverence for our ancestors and nature). He is truly an inspirational figure and an amazing artist! He is scheduled to be present at the April 30th screening for a Q&A. 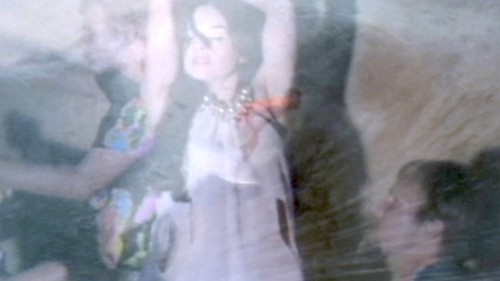 Occasionally, I Saw Glimpses of Hawai‘i

A film essay looking at 100 years of Hawai‘i in film, explores issues of representation and gender. This filmic deconstruction is a lively, often infuriating examination of Hollywood’s portrayal of the islands, highlighting the essential necessity of homegrown filmmaking.

AUTHOR’S COMMENT: The director of this short film, Christopher Makoto Yogi, is half-Okinawan. Two of his original works, “Obake” (a beautifully haunting short film) and “I Was a Simple Man” (a feature film in progress), focus on a Nikkei man in Hawaii who, near the end of his life, is visited by the ghosts of the past.

Now that summer is officially gone, folks here at the Okinawa Association of America are winding down from Obon Festivals, Nisei Week, and other summer activities. The OAA was once again honored to represent Uchinaanchu in Los Angeles with their participation in the Nisei Week Grand Parade, having over 50 volunteers and Geino-bu (Performing Arts Commitee) dancers trekking across Little Tokyo! We were also proud to have members of affiliated groups such as Ishihara Minyo, Ryukyukoku Matsuri Daiko, Shima Minyo, and Tamagusukuryu Kansen-Kai representing Okinawa in the Tanabata Festival, Taiko Gathering, and Nisei Week’s Closing Ceremony Ondo!

For those who weren’t able to attend this year’s Nisei Week festivities (or for those who want to re-live the experience), we’ve compiled a top-5 list of the best Nisei Week videos that we could find on YouTube. If you have a video that didn’t make the list, please drop the link in the “comments” section at the bottom of this page (or on our Facebook page)!

END_OF_DOCUMENT_TOKEN_TO_BE_REPLACED

60+ volunteers represented the Okinawa Association of America in this year’s Nisei Week Grand Parade (August 12, 2012)! Approx. 36 of them wore kasuri pattern kimonos and danced to choreographed Okinawan and Japanese Bon-Odori! One week later, 18 of our dancers returned to Little Tokyo to participate in the Nisei Week Ondo and Closing Ceremony!